Our Wild Life in Samburu 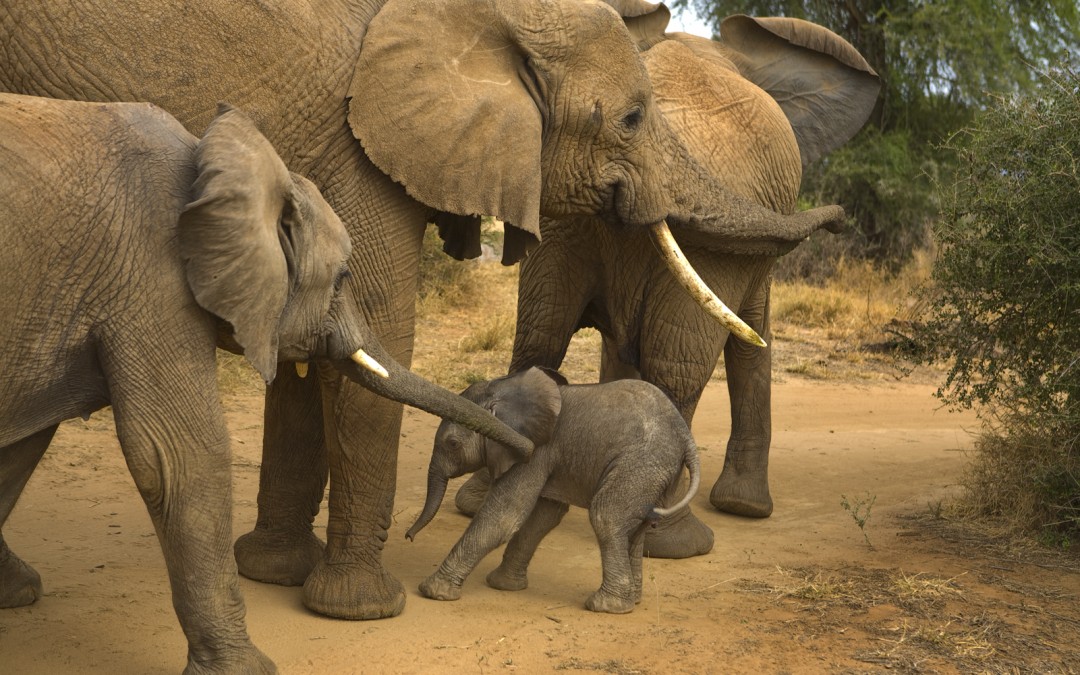 The more you watch elephants, the more you slip into their mind-scape and begin to see the world through their eyes.  Most of what I know about them I learnt by osmosis growing up amongst them while my parents did their research in the ’70s.  Later on, I was able to match my intuitive interpretations with what I read, which opened my eyes to the deep magic of the natural world.

Spending time with elephants you appreciate how tender they are to one another, how independently minded each can be, the daily challenges faced by a matriarch as she tries to persuade her family to follow her lead, or her courage in times of danger.  Watching them opens up a window onto the whole world around them, because they are constantly interacting with all the other animal and plant species they live amongst.  So you can slip quietly from intense observation of one species to the next, until the inter-connectedness of all things becomes apparent. 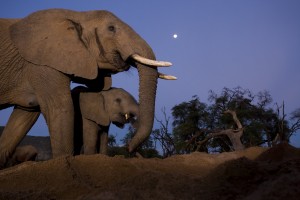 Elephants can walk long distances at night, and will lay down to sleep during the coolest hours. ©Michael “Nick” Nichols

Perhaps what I’ve learnt most from growing up with elephants is the importance of this inter-connectedness – the fabric of life upon which we all depend – and of how critical wild spaces are for our sanity. It was perhaps this longing to return to natural “silence” that prompted Frank and I to relocate to Samburu district to bring our kids up at Elephant Watch Camp.  Both of us are deeply committed to the cause of saving elephants, but we also felt it was an amazing opportunity to open our kids’ eyes to a very different way of life and give them time to explore their imaginations and creativity while their brains were still uncluttered. 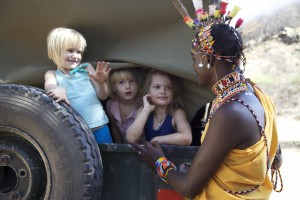 Samburu Warrior, Ngila and the girls prepare for a sunset dance and celebration. ©BBC

At first they were scared by the monkeys stealing mangoes at breakfast or howled when thorns pricked their baby-soft feet, but it was merely a matter of learning the ropes.  Pump action water pistols work a treat at keeping monkeys at bay, so the sharpshooters are now locked and loaded in time for tea, and they’ve learnt to scuff their feet in the dust to get rid of most thorns. 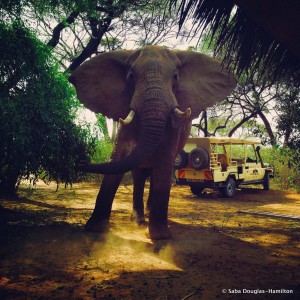 More worrisome are the bull elephants that take up residence in camp during the sagaram season.  As these nutritious Acacia seeds rain down onto the tents, the bulls hustle in to make the most of it. On one occasion, when one of the twins was being rather disobedient, tromping off on her own not looking where she was going, she almost bumped into the backside of a bull called Sarara. He whirled around with a great whoosh of annoyance and sent her scampering for cover, luckily into the arms of a warrior called Mporian who was keeping an eye on her.  It was a very close call that made the hair on my arms stand on end, and afterwards I could feel her little heart fluttering in her chest like a trapped bird. So far Sarara has proved to be more bark than bite, but you can never take elephants for granted.

The fact that elephants come into camp at all is the most amazing show of trust, and is thanks to the protection they get here in Samburu reserve and the gentle touch of the staff at Elephant Watch Camp. Even better is their inclination to seek out comfortable sand banks close to our tents at night and lay down for a snooze, so that you can hear the calm of their deepening breath as they succumb to elephant dreams under the stars. Now and then leopard also pad through camp, which sets the vervet monkeys into a frenzy of alarm calls, and the they like to tell us about the presence of civet cats, wild dog, servals, and hyaena too which wakes us up quite a lot at night. But since they are our extra eyes and ears it’s always good to listen to what they have to say.

My favourite time of day is twilight, as the Verreaux eagle owls take flight from their perch above Tent Two and disappear like shadows into the night sky. I love the delicious cool of the evening, the balm of a sun-warmed shower, tucking the kids into bed with a goodnight story, and then heading off to sort out dinner for the guests.But camp is a lot of work, and it isn’t always easy. Trying to keep the standards high is an enormous challenge – vehicles break down, people get sick, nomads go on walkabout, termites gnaw through the infrastructure, and sadly, every now and then we find that an elephant has been killed – but that’s just part of life in this part of the northern frontier. 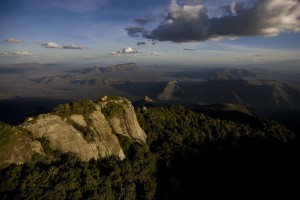 The northern frontier of Kenya where elephants are free to roam as they have for millennia. ©Michael “Nick” Nichols.

Samburu national reserve is a pocket-handkerchief of a protected area that’s part of a much greater wilderness that stretches all the way up to the Ethiopian border. Part of Frank’s work at Save the Elephants is to monitor where the elephants go in that wilderness and why. So we don’t often find time to put our feet up. This only happens during the rains when we pack up camp completely and take a proper break, heading down to the coast for a week or two of swimming in the Indian Ocean.

Our favourite place is Lamu, a 1,000 year old town that’s part of an archipelago of Bajuni islands, where we stay with friends. It’s a very different kind of wilderness with endless sand dunes and islands to explore, whale sharks, dolphins, and even turtles hatching on the beaches, but one that speaks to our hearts in much the same way.Kenya is simply magical, and while I know that nothing can last forever, right now I’m very happy with my Wild Life.