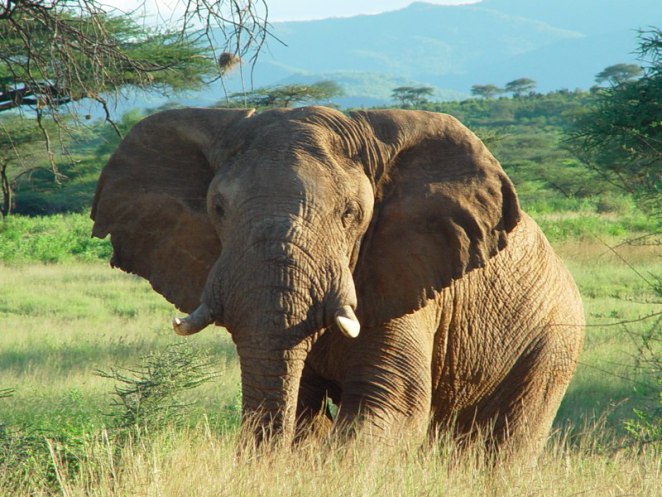 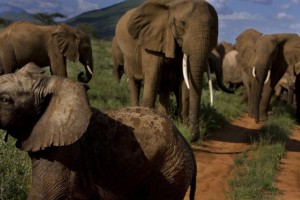 The Save the Elephants team in Samburu can individually recognise about 1000 elephants, and have been monitoring them closely since 1997. For ease of reference each family is named after a category, like the Storms, Winds, Acacias, or Native Americans, so individuals bear names such as Tempest, Harmattan, Polyacantha or Sioux. What makes these elephants special is that they are part of one of the biggest remaining free-roaming wild elephant populations in Kenya that come in and out of the Samburu and Buffalo Springs national reserves at will, ranging vast distances across the wild frontier of the Ewaso ecosystem in the Northern Rangelands.

The conservation efforts in north Kenya stand heads above other parts of Africa, because of the collaborative nature of the work that is done by the NGOs, community conservancies, game ranches, government agencies and parastatals based there.  Nothing is achieved in isolation, so for all our successes and triumphs at Save the Elephants and Elephant Watch Camp, I’d like to credit also our partners at Kenya Wildlife Service, Samburu County Government, Lewa Wildlife Conservancy, Northern Rangelands Trust, Ewaso Lions, Grevy Zebra Trust, Milgis Trust and the many Community Conservancies whom we have the pleasure to work with. In addition, from time to time we find orphaned or injured elephants (and other animals), and have to call upon the services of the David Sheldrick Wildlife Trust who unfailingly answer our cries for help by scrambling a rescue plane or immediately sending in their mobile veterinary unit. Thank you all! 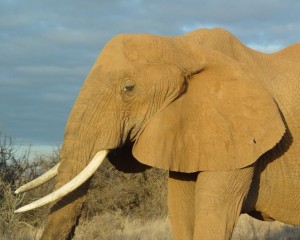 © STE – the beautiful Babylon, matriarch of the Biblical Towns

Right! Back onto elephants. Today, I’d like to celebrate some of the elephants I love best. Like Babylon, above, from the Biblical Towns, the oldest and most beautiful matriarch in Samburu, so tall and broad in body, that from a distance she looks like a bull. Her wisdom and guidance has steered her family through many crisis, and for over 20 years nurtured the brave but broken bodied Babel, a crippled female with a badly broken back leg and twisted spine.  Sadly, Babel succumbed to the devastating drought of 2009, but Babylon, Jerusalem and the rest survived and are thriving. 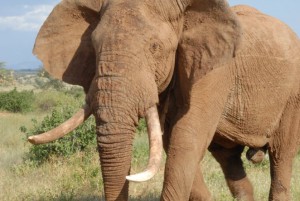 Matt is a gorgeous 45 year old bull from the north whom we only see in Samburu reserve when he’s in musth.  This year, after decent rains, he sailed in like a battleship, oozing secretions from his swollen temple glands, that were irresistible to female elephants.  His first paramour was Blizzard’s teenage daughter, whom he guarded and mated  over a three day period. Once he was sure the oestrus window had passed, he moved on to lovers new. 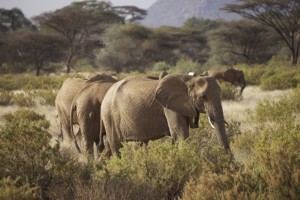 Habiba is a 14 year old orphan matriarch whose entire (adult) family was gunned down by poachers. Since the age of about 11, she’s been in charge of a ragtag bunch of orphans, all that remains of her once abundant Swahili family. She has a distinctive wrinkle in her right ear, and wears one of our radio collars so that we can track her movements for the PhD study of STE researcher, Shifra Goldenberg. Habiba has developed a special relationship with Cinnamon, the last remaining adult and now matriarch of the Spices family, who tolerates the presence of the Swahili orphans and allows them to tag along with her own family.

The one elephant that made our hair stand on end whenever he came into the reserve was Rommel, infamous for having rearranged one of our research vehicles during a fight with Abe Lincoln in 2002. Rommel was losing the fight, and took his frustration out on the car. The researchers, George Wittemyer and his assistant Daniel Lentipo, were lucky to escape with their lives, and amazingly the car kept on going for a few more years, despite its striking new bodywork! Head of field operations, David Daballen, tried to collar Rommel in 2004, but his neck was too big for even the largest collar. He was last seen in 2008. Now MIA presumed dead. 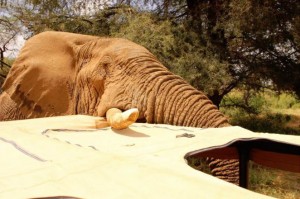 Anwar is a super friendly bull who likes to play with our cars. He’s a bit clumsy and has smashed David’s windscreen twice by mistake. He’ll occasionally rest his tusks on the bonnet, and has even sat on the bumper. It can be quite alarming if you don’t know who he is! 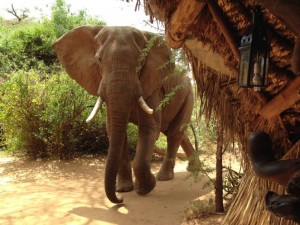 Yeager, Sarara, Malasso, and some of their younger cohorts have learnt to make the most of both the Save the Elephants and Elephant Watch camps. They’ve realised there’s a huge advantage to venturing where few others dare – into the centre of human “settlement” – where trees have been protected and thus provide an untapped bounty of succulent seeds. A high risk, high gain strategy that reaps great rewards, and keeps us all on our toes! 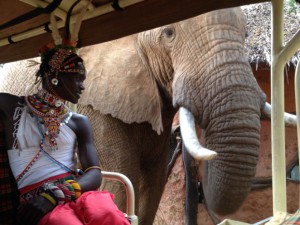