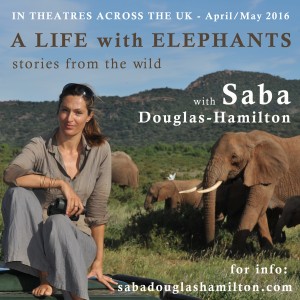 We’re very excited and proud to announce that our leopard-lady, Saba Douglas-Hamilton, will soon be sharing some of our best stories from Samburu in theatres across the UK!

Starting on April 12th and running until May 3rd 2016, her talks will be a delightful mixture of barefoot adventures and fascinating encounters with the many sentient creatures she’s studied as a wildlife filmmaker around the world.  Together with the latest scientific insights into the world of elephants, the dramatic frontline of conservation with Save the Elephants, and behind-the-scenes glimpses using clips from TV series such as This Wild Life, Big Cat Diary, and the Secret Life of Elephants, the talk is sure to bring a blast of African sunshine to your evening and is suitable for all the family!

Her talks will be taking place in the following regions and cities:

Venues and dates with links for direct booking can be found on her website www.sabadouglashamilton.com, or here below: