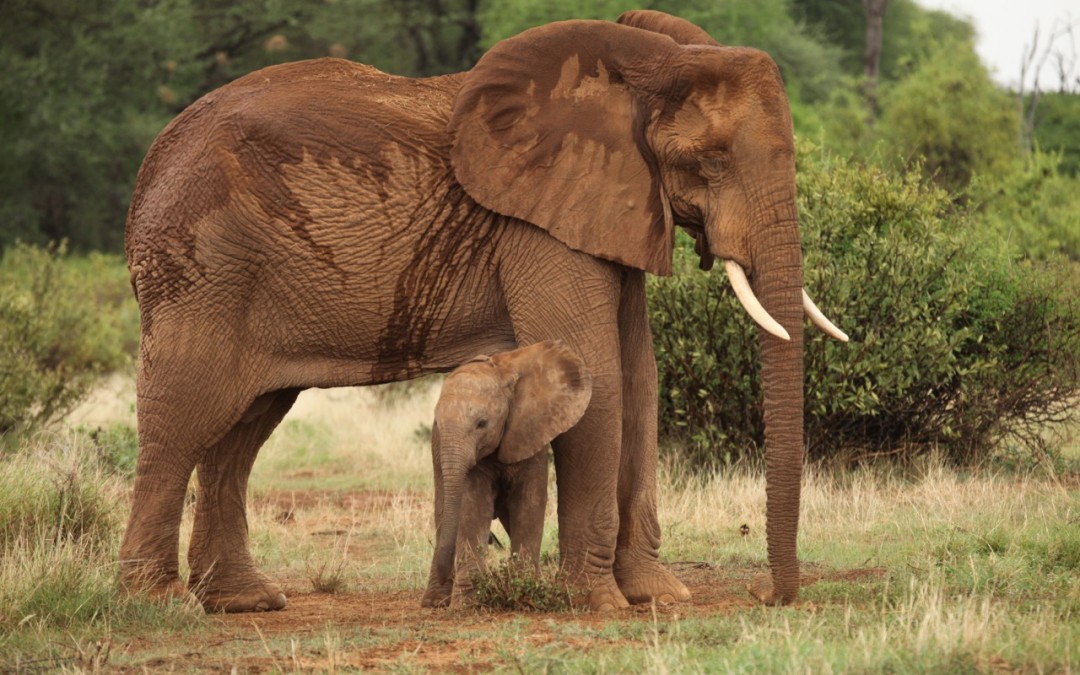 This last month, a BBC film crew joined us to make an obs-doc series called This Wild Life, about life in the bush with our small family, working side by side with Samburu nomads at both Save the Elephants and Elephant Watch Camp.  A typical morning starts with the low chat of Verreaux eagle owls on their favourite perch by the Mess tent, or vervet monkeys alarming at the low-slung presence of a cat.  Dancing acacia leaves scatter the early morning light as we drink our tea, and the river sighs by in a soft rush. Then the children arrive, clamouring at the door “Maaaama! Fungua ‘lango [open the door]! Taka chai [want tea]”.  Just two and a half years old, the twins baby-talk Kiswahili better than English – it’s often much easier to keep on speaking Kiswahili if one wants to be properly understood.  Selkie (their older sister), fluent in both, leaps into bed for a cuddle.

After breakfast I jump into the Land Rover to join the film crew.  A female elephant is sick – Cherie, from the First Ladies. She has a five-month-old calf.  She keeps stretching out her back legs or leaning uncomfortably forward, as if trying to ease pain in her stomach.  Apparently she’s been like this for weeks. Her calf tries to suckle but she brushes it off the nipple with her leg.  At this age he relies almost entirely on her milk.  I notice her deeply sunken temples, and the sharp pinch around her cheekbones. Signs of dehydration.  This is serious.  We wait and watch for days, finding her mostly alone with her calf, now unable to keep up with the herd.  She takes to resting on raised edges of roads or sloping riverbanks, which make it easier to get to her feet.  I sense her determination to live for the calf. But she’s dying, and without milk the calf starts losing condition.

We call the Kenya Wildlife Service vet, but he feels that Cherie is too far-gone so survive being tranquillised.  He asks us to keep on monitoring her.   Night falls and Cherie finally collapses. The calf nudges her emaciated body with its head, encouraging her to rise, then lays its trunk softly across her hip and leans in close for comfort.  They stay like that for a long time.  It’s so quiet. So dignified. There is clearly so much love in this deeply private moment.  For the first time in my life I pray that an elephant will die.  But she is hardier than I imagined.  The night passes, and another long day goes by.  I’ve barely slept a wink.  Somehow she just keeps on getting up and walking away. 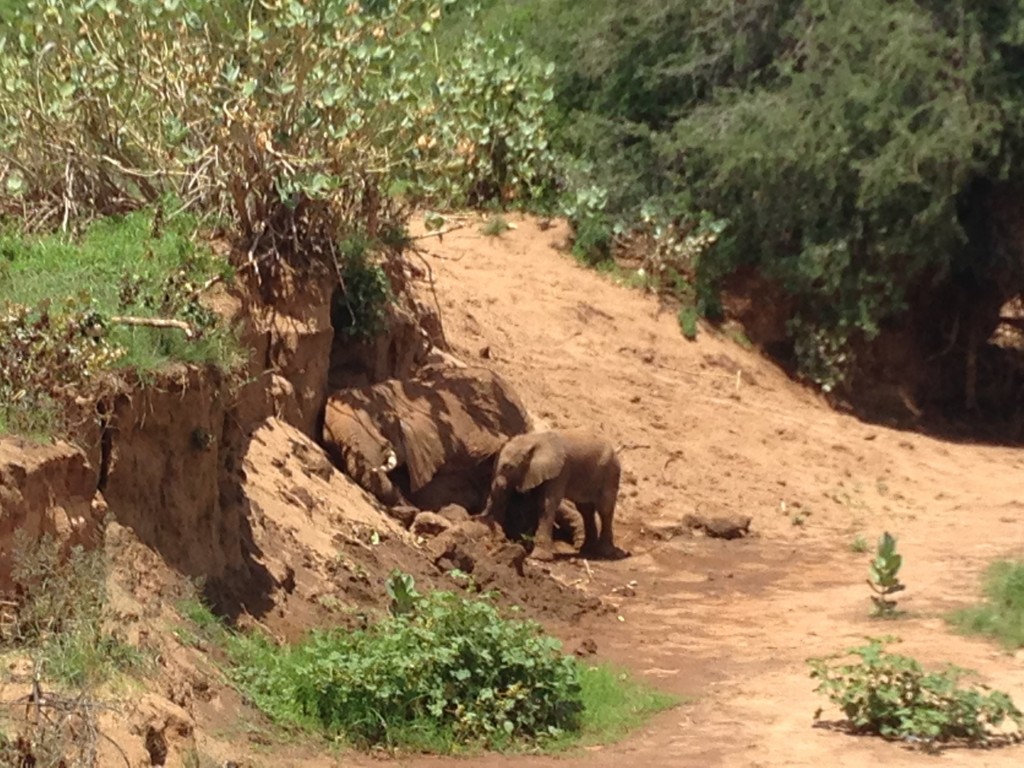 Elephants have a strong sense of their own mortality.  So does she know that she is dying?  Is she struggling on because her calf is so young?  Would she otherwise have given up a long time ago?  In these terrible days of poaching, it is most unusual to be watching a natural death and I am deeply aware of the sad privilege.  I just wish I could ease her pain.   The poor vet is faced with a hard moral choice.  She has lost her milk and the calf is rapidly deteriorating, so does he save the mother or the calf?  Convinced that there’s no hope for Cherie, he requests permission to euthanise her before the calf becomes too weak to survive.  But the go-ahead must come from way up the KWS ladder, so we have no choice but to wait.

Gazing up at the star-scape later in the evening, taking the second watch, I wonder if she has noticed the intense beauty of the night.  Perhaps it will be her last in this shimmering, moonlit landscape.  The calf eats leaves and grasses nearby, but I see that he has trouble controlling his little trunk and much of the food drops to the ground.  He must be so hungry.  She rests a long, long time, then suddenly gets up and stands ghostlike on the edge of the riverbank.  Gathering her courage she launches into a long-legged stride, disappearing into a thicket with the calf.  I lose them completely in the darkness.  Depressed, tired, and dreading every possible outcome of the morrow, I drive back home, the rough familiarity of the Land Rover providing some comfort. If she dies tonight, I think, we will make every effort to rescue the calf and give it a second chance at life.  That, my beautiful Cherie, I promise.

In bed, I listen to the frogs down by the river. A Scop’s owl calls, cicadas sing, and a lion’s roar echoes off the far side of the riverbank.  Our room is simple, humble even.  We only have the most basic things we need.  But, here, where each hour is marked by a fresh croaking, burbling chorus of animal life, I feel like the richest person in the world – bejeweled by the sounds of the night, perfumed by the purest air, clothed in the softest darkness hung with stars – doing what I love.

We find Cherie back with her family the next morning, eating the branches of a Commiphora. The Samburu tell me they use its roots as medicine for stomach ailments. It seems to be the one thing she likes, but she eats it only at night.  Biodynamic biomedicine?  She certainly seems a little stronger.  The vet feels there is no way he can now justify putting her down, not when she clearly has such a will to live.  Against all odds, she just might pull through.  But the calf is suffering.  Surrounded by family it feels secure, and is comforted by the presence of its mother.  It’s making a valiant effort to eat and drink, but I fear that without milk it will die.  There is nothing the vet can do.   He heads back to HQ, a two-hour drive away.  Keep on monitoring, he says.  But I have to leave Samburu. The BBC film crew depart and I head back home, desperate to see my children.  It’s up to the Save the Elephants field team now.

Cherie rests for most of the day, and the team take it in turns to keep watch.  The calf is increasingly listless.  He eats continuously, shoving leaves and soft grasses into his mouth to sate his gnawing hunger.  At dusk, Cherie crosses the river and collapses into an erosion gully.  Acting on intuition, David Daballen, head of field operations, steps out of his car and gently touches her eyes.  She’s dead.  At last.  The calf flings his little trunk across her body then steps his front legs up onto her stomach.  He rocks to and fro.  David decides to keep guard overnight so as to try to capture the calf the following morning.  But as the night deepens, a pride of lions start to roar nearby, shattering the tranquility.  They circle closer.  David knows the team must act now or it will be too late.

Three times they capture the calf and three times he breaks free, bigger than expected, strong as an ox and ferocious with grief. Vast black storm clouds block out the moon and suddenly the heavens open.  Hit by the deluge, the team race between Salvadora trees in a last heroic effort to catch the calf, slipping in the mud, acutely aware of lions around the corner.  Panting with effort, wet to the bone, and shivering with exhaustion, the team give up.  The calf spins around and runs off into the night.

Early next morning David finds him again, close to his family and two large musth males.  It’s an awkward context for a rescue, complicated by the presence of the bulls. The David Sheldrick Wildlife Trust vet and aircraft are scrambled into action in Nairobi.  The calf’s family shows a keen interest in him, touching his back and smelling him to catch up on the dramas of the night.  David waits for a gap then gently eases his vehicle between them, isolating the calf from the other elephants.  This time round, with enough people on hand, the capture is successful.  Within a few hours, the calf is secure in the aeroplane heading towards Nairobi, sedated and on a drip.  When he arrives at the orphanage he guzzles down four bottles of milk within minutes.  This is a baby that wants to live.

A few hours later, I go to visit him at the orphanage with the children. He’s surrounded by other little elephants, making friends but still as wild as can be, charging the keepers.  “Sokotei”, I think – the local name for Salvadora – in honour of his courageous escape from his would-be rescuers as a wild storm sent his mothers soul up into the Universe.  Yes, that’s the right name.  I know he is missing her madly, but he’s strong and has a fighting chance.  If only he can make it through these first few weeks.

Back at home the kids dive under the duvet and pretend to be baby ice-bears, mewling for my attention.  I think of the snug snow-caves mother polar bears dig out for their cubs in winter, and of the deep, instinctual, tenderness with which she cares for them.  How lucky we are, I think, to be alive.  To have health, love, and family.  Long may it last.  Then I slide into the snow cave, and join the game.